Venice Carnival became extremely popular during the eighteenth century, when aristocrats from all over the world would attend the annual festival. The royal families and nobility of other neighbouring countries would also come and dress up with elaborate masks and costumes.

for centuries, it was one of the only ways the citizens could escape from the control of the Venetian government. When Napoleon invaded Venice, the Carnival was banned for fear of the citizens conspiring against the French troops. The festival was not to come back officially until the Italian government decided to promote the Venetian culture and history in 1979.

How does it work?

The Carnival of Venice is very different to carnivals which take place in Spain or in Brazil. The celebration takes place over ten days in which people dress up and take part in organized parades or simple processions on the street.

The costumes are seventeenth-century Venetian dresses, very much as if they were from a painting by Canaletto.

Numerous events and balls are organized during this period. Some of which are private and thus, difficult to access, unless you know someone who can invite you. If the parties aren’t private, then they are expensive and tickets will cost you about € 500 (US$ 525.80).

Does everyone dress up?

Most tourists do not dress up during the Carnival. They prefer to walk around enjoying the costumes and elaborate masks, although some wear masks, which they have bought from the many street stands in the city.

The general idea is for tourists to walk around the city and take photos of the best costumes and most impressive masks. There are those, of course, that go to Venice and hire beautiful clothes for the occasion.

The Carnavale normally takes place between late January and mid-February. Since Venice is so close to the Alps, it's usually very chilly, and can sometimes snow, so make sure to bring a hat, gloves, a scarf and a good overcoat.

The dates for the Venice Carnival in 2023 will be from 16th to 21st February.

Like every year, if you're thinking of visiting Venice during this week, you'll need to book your flights and hotel as soon as possible. The city is quickly packed during this period.

Click on the following link if you would like to check out the photos we took during the Venice Carnival  2009 and discover the best costumes and masks. 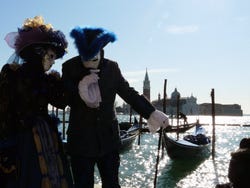 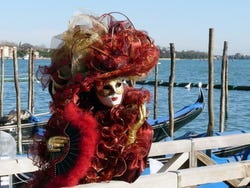 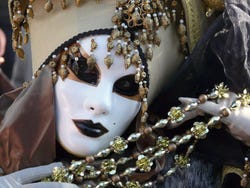 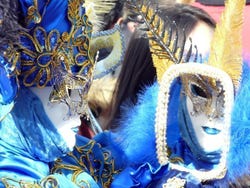 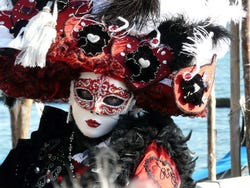