The Campanile di San Marco is the bell tower of St. Mark’s Basilica. It is located in the Piazza San Marco and is the tallest building in Venice, standing 323 ft (98.6 m) tall. It offers superb views of the city.

The original tower was used as a lighthouse for the sailors, as well as a belfry. It was restored in various occasions and its present form dates from 1515.

Climbing to the top of the Tower

At the top of the Tower stands a golden statue that represents the archangel Gabriel. The belfry houses five bells, each of which had a specific purpose during the Republic of Venice: the “Marangona”, is the largest and rang twice a day, once at the beginning of the worker’s day and one at the end. The “Malefico”, is the smallest bell and it rang with every execution. The “Nona” rang at midday. The “Trottiera” would summon the members of the Maggior Consiglio and lastly, the “Mezza terza” would announce a Senate session.

In 1902 the tower collapsed. Ten years later it was rebuilt exactly as it had been.

Visitors will have a magnificent view of Venice and the Venetian Lagoon from the Campanile’s observation deck, a beautiful scene of St Mark’s Basilica, Santa María della Salute, San Giorgio and if it is sunny, you can even see the neighbouring island of Murano. 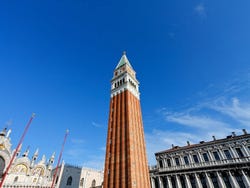 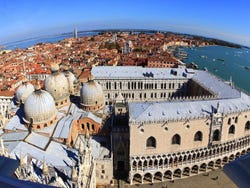