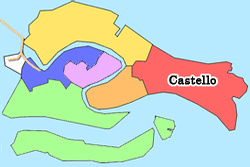 Castello is the largest of Venice’s six sestieri. The neighbourhood is divided into various contrasting areas, some very touristy and others not at all. The frontier with San Marco is very popular among the visitors, since it is very close to the Doge’s Palace. However, Castello is also home to the Arsenale, which used to be the largest shipyard in Venice. This area is not very appealing, especially compared to the rest of Venice. Every odd-numbered year, the Venice Biennale takes place in the Arsenale.

The name “Castello” comes from an old castle that was founded in this district during the Roman Empire.

A large part of the sestiere is occupied by the naval dockyard, but the rest of the neighbourhood is very authentic, where you will get an idea of how the locals live. It is also home to various landmarks:

Things to do in Castello

One of the district’s highlights is the Basilica of Santi Giovanni e Paolo, the city’s largest temple. It is also interesting to take a walk to see the Arsenale, although the area is not very picturesque or visiting the Naval Historical Museum.