The Acqua Alta is the phenomenon by which Venice is flooded temporarily various times a year when the Adriatic Sea tide rises. This event is only called Acqua Alta when the sea level rises over 90 cm.

The Acqua Alta phenomenon existed from before the Middle Ages. The first records of this force majeure dates back to the sixth century. By the end of the nineteenth century, the high waters are documented as a phenomenon to be studied.

If you analyse the maximum levels year to year, you can see that the tide rises nearly one hundred times a year, and increases every year. The phenomenon especially happens in winter and spring.

Measures taken during the Acqua Alta

When the sea level begins to rise, sirens sound to alert the population and then the authorities put several raised walkways in the main flooded areas so that tourists and locals can walk without getting wet. During these days, the inhabitants don’t leave their homes without their wellington boots.

Piazza San Marco and its surrounding area is the first part of Venice to get flooded, since it is practically at sea level.

Looking for a solution

For over ten years, the local government worked on the MOSE Project. The proposal was intended to protect Venice by installing a system of dykes and rows of mobile gates to control the level of water. The construction, which was completed at the end of 2014 was heavily tainted by corruption complaints. In 2016, UNESCO has criticized the project’s results, considering that there is a lack of coordination between the cultural and natural aspects of the design, which could irreversibly damage the Venetian Lagoon.

Although there are numerous tourists that want to experience the Acqua Alta phenomenon, this is a serious problem for Venice and its inhabitants. UNESCO has warned that the phenomenon can seriously damage the city’s cultural heritage.  The city could be included in UNESCO’s World Heritage in Danger List very soon for this exact reason. After several decades of delay, the floodgate system created to protect the city has been successfully activated in 2020. 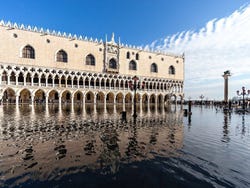