Treviso Airport is located 25 miles (40 km) north of Venice and is mainly used by low-cost carriers like Ryanair and Wizz Air.

The airport is officially called Canova Airport, after the Italian sculptor Antonio Canova, although it is widely referred to as Treviso Airport. The installation is truly small and is impossible to get lost in. Every year it transports a little more than one million passengers.

Getting to Venice from Treviso Airport

To get from Venice to the airport, you will have to get the same bus from Piazzale Roma. The buses leave between three and two and a half hours before the departure of each flight.

A single-ticket costs 10€ and a return ticket 13€. If you purchase the return-ticket, keep in mind that it is only valid for seven days.

The Barzi buses run between Treviso Airport and Venice city center. The vehicles run at exactly the same times as the ATVO buses and are the same price. The advantage is that they take just 40 minutes to get to the center, instead of 70 minutes, since they use the freeway. The ticket can be purchased from the bus driver. 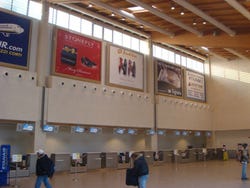