The city of Venice spreads out over a series of 119 islands that are located in the Venetian Lagoon – a vast body of salt water separated from the Adriatic Sea by a long piece of land. This part of Italy was inhabited by a few Illyrian tribes and the Veneti that lived on stilt houses in the Lagoon and lived off fishing and extracting salt from the Lagoon.

Venezia was founded in 421. The Veneti, who had been expelled by the Ostrogoths and the Lombards, took refuge in these marshlands in the mouth of the River Po, forming the city of Venice.

The city’s “privileged” site in the middle of a swamp gave it a great independence and made it very difficult for those that wanted to seize the land. In 810 Charlemagne’s own son (Pepin of Italy and king of the Lombards) had to withdraw from the Lagoon after six months of siege.

During the sixth century Flavius Belisarius, the general of the Byzantine Empire conquered Venice. Under the protection of the Eastern Roman Empire, Venice became part of the Exarchate of Ravenna.

In 697, the wealthy families of Venice took advantage of the Exarchate's weakened position to place the first doge Anafestus Paulicius in power. The position of the doge was at first hereditary and lifelong. Later, after several power struggles between the city’s patrician families, the doges were elected.

In 829, the relics of Saint Mark the Evangelist were stolen from Alexandria in Egypt and smuggled to Venice. San Marco would become the city’s patron saint and the relics safeguarded in St Mark's Basilica.

A devastating fire destroyed the city centre in 976, including the Doge’s Palace with all the archives of the city and the first church dedicated to San Marco.

This fruitful relationship and trading allowances guaranteed Venice important commercial ties with other regions and countries. The Venetian ambassador had exclusive concessions with Byzantium and his diplomacy was characterized by his sagacity, flexibility and opportunism. An example of these privileges is that the Venetians kept on trading with the Muslim world, even when the Lateran councils had prohibited it.

Venice’s power increased thanks to the commerce of the following materials: spices and silk from Constantinople and Alexandria, transporting slaves, wood, fish from Dalmatia and iron from the Alpes. One of their most successful businesses was buying slaves from the south of Russia to sell them in North Africa. Venice would also sell the slaves it would buy from Turkey and Alexandria in Europe.

Venice became an imperial power and established the Latin Empire as a consequence of the fourth crusade that took place between 1202 and 1204. The Venetian galley ships led by Enrico Dandolo captured and brutally sacked Constantinople. The Greek Empire was then divided up between the crusaders and Venice. Numerous commercial areas of Syria, Palestine, Crete and Cyprus were handed over to Venice. It was during this period that Marco Polo, a Venetian merchant reached China and wrote a book about his travels.

Once Venice controlled the Mediterranean, it turned its attention to the Atlantic, reaching Southampton, Bruges and London, where the Venetians established their colonies.

In 1284, Venice introduced gold ducats (coins) that were used as a trade coin in Europe for the next three centuries, along with Florence’s Florin.

From the beginning, the Republic of Venice strove to ensure that the doge would never have complete power over the city. A form of Republican government was established in Venice that didn’t exist in any other part of Italy. The patricians did not want to be governed by just anyone, especially when it didn’t benefit their financial interests.

From 1148 onwards, the Venetians forced every doge to sign the “Doge’s Promise”, an agreement which he had to fulfil as soon as he was elected.

In 1177, the Great Council was introduced to diminish the influence of certain great families. The council was made up by selected members of the nobility. Years later it was followed by the Minor Council that consisted of six members that became the doge’s advisers. And The Quarantia (The Council of the Forty) which was the Supreme Court.

These institutions were then merged by the doge with the creation of the Signoria of Venice in 1223. The Serenissima Signoria was the Republic of Venice’s supreme body of government and guaranteed the continuity of the Republic, as is represented in the expression: “The Doge is dead, but not the Signoria”.

In 1229, a senate, the Consiglio dei Pregadi, was formed. It consisted of 60 members that were elected by the Major Council. From this senate, Venice’s foreign affairs were determined and the ambassadors elected.

A Council of Ten was established in 1310. This organization was similar to a secret state police. Throughout the years, it became very powerful and turned into the central political body in Venice.

“Collegios” were formed by various representative groups of Venice. These created an executive branch.

In fact, the doge had very little power and most of the decisions were made by the Major Council. The members of the Great Council of Venice were passed from father to son from 1297 onwards.

An oligarchy of two hundred families began to govern Venice.

Threatened by the power of the Duke of Milan, Venice began to conquer other parts of Italy during the first half of the fifteenth century.

In 1410, Venice controlled most of the region including Verona and Padua, reaching eventually Brescia and Bergamo. The Adriatic Sea became the “Venetian Sea” and the power of Venice extended to other countries like Cyprus.

The weakness of the Byzantine Empire allowed Venice to acquire control over Crete, Cyprus (in 1498) and Eubea.

During the fifteenth century, Venice was at the centre of the world’s commerce and had the largest port in the world with over 200,000 inhabitants. The wealthiest families had beautiful palazzos built by artists like Veronese and Giorgione.

Venice had reached its maximum peak during this period.

If the sacking of Constantinople marked the date from which Venice grew and became an imperial power, then the city’s long decline began when it lost Constantinople to Sultan Mehmet II in 1453. Another important factor that hit Venice hard was the exploration of the Americas in 1492 and Vasco da Gama’s discovery of the sea route to India.

During this period, the Ottoman Empire conquered the Balkans and Venice’s new territory was threatened. Finally, in 1570, the Venetians had to abandon Cyprus leaving it to the Turks. In the following years, Crete and other Venetian territories were also seized by the Ottomans. In 1573, the Republic of Venice signed a peace treaty with the Ottoman Empire, which ended the Ottoman and Venetian war.

Thanks to the Holy League, allied with the Holy See and Spain, Venice tried to retrieve its lost territory and, even though it won the Battle of Lepanto against the Ottoman Empire, it was unable to reconquer any land.

In addition, Venice had confronted the Pope when expanding its territory in Italy which led to great tensions. At the time, the Pope had very powerful allies such as Louis XII of France, the Holy Roman Emperor Maximilian II and Ferdinand II of Aragon. But finally, Venice’s diplomacy saved it from an important confrontation with the Pope.

Lastly, the Plague of 1629-31 wiped out a third of the population. Venice was so diminished that Naples tried to conquer it through the Bedmar conspiracy and the Habsburg fostered the Port of Trieste to weaken Venice even further.

The conflict for Venice

During the eighteenth century, Venice was a shadow of its former self. It tried to recover its lost influence by declaring war against Tunisia, but in May 1797, Napoleon conquered Venice. During the following years France and Austria fought for dominion over the city.

In 1797, Napoleon Bonaparte tried to take sides with Venice, but the city refused. Napoleon took revenge by putting an end to three centuries of independence. He sacked the Bucentaur (the doge’s state barge), stealing all the gold and precious stones he found. The barge was then sailed to France where it was used as a galley for prisoners.

The Doge Ludovico Manin and the Great Council abdicated and a pro-French municipal government was put in place. Napoleon organized the Cisalpine Republic in Italy and became its president. A few years later, Napoleon proclaimed himself Emperor of France and became King of the Kingdom of Italy.

By the Treaty of Campo Formio (12 October 1797), Venice came under the Austrian Empire.

Napoleon regained power over Venice from the Austrians in 1805 by the Treaty of Pressburg and it became part of the Kingdom of Italy. A year later, Napoleon placed his brother Joseph Bonaparte as head of Venice. As a result of being placed under French dominion, an intense Italian nationalist sentiment developed.

In 1814, Napoleon was defeated and once again the Serenissima was returned to Austria, under the Kingdom of Lombardy-Venetia. Years later, Venice was detached from Lombardy that had opted for the unification of the Kingdom of Italy.

The nationalist sentiment spread quickly and secret societies formed that searched for ways of unifying Venice with the rest of Italy. Two of the most important societies were called Young Italy and the Carbonari.

Various uprisings were organized by these societies. However, the Austrian army defeated the revolutionaries in the Rieti Battle in 1821. Ignoring what had taken place during the Battle of Rieti, new insurrections took place in Piamonte, Turin, Modena and Parma on 11 March.

After the Battle of Rieti, an assembly was formed that voted for the unification of Venice to Italy. As a result, the Austrians destroyed a large part of the city and Venice surrendered on 22 August 1849.

The uprising escalated quickly and the war expanded to include all of Italy against Austria. The Duchy of Milan, the Pope and the King of Naples sent reinforcements to fight against the Austrians. The Austrians, on the other hand, were helped by the Holy Alliance.

In 1866, the Treaty of Vienna was signed and the Austrians ceded Venice to France, which would then give it back to the Kingdom of Italy.

Venice became part of the Kingdom of Italy in 1866.

After the unification of Italy

On 19 April 1893, the City Council of Venice and the mayor Riccardo Selvatico passed a resolution to create a national art exhibition in the Lagoon. The first Venice Biennale was inaugurated on 30 April 1895. Today, it is one of the most renowned art exhibitions in the world.

The Serenissima suffered great urban and territorial changes at the beginning of the twentieth century. In 1917, a part of Mestre was added to Venice. The Italian government decided to develop a residential area on Porto Marghera.

In 1933, the Ponte della Libertà was built and hence, the road connecting Venice to Padua. The Corso del Popolo was constructed to connect it to Mestre and part of the Canal Salso was interrupted.

After World War II, an important urban expansion took place in the city’s surroundings. During the same period, many inhabitants that lived in the heart of Venice moved to Mestre, especially in the seventies and after the floodings of 1966.

A tornado registered as F5 on the Fujita scale struck Venice on 11 September 1970 killing 21 people and destroying much of the city centre.

Today, the biggest economy in Venice is based on tourism. The city is also an important cultural hub thanks to La Biennale, the Film Festival and one of the most prominent universities in Italy, Ca’ Foscari. Nevertheless, the Serenissima suffers from a high percentage of its population leaving the city due to the negative impact of a mass tourism and the high prices of the city. 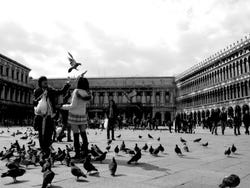 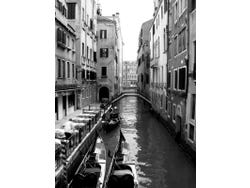 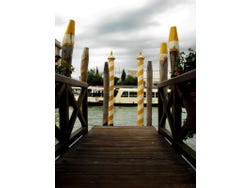 One of the many piers in Venice 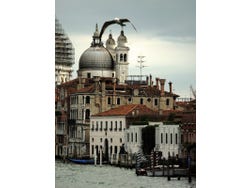