The Scuola Grande di San Rocco is one of the most prominent buildings and most beautifully decorated in Venice. The structure was established during the sixteenth century.

One could say that the Scuola Grande di San Rocco signifies to Venice what the Sistine Chapel signifies to Rome. Tintoretto was commissioned to decorate its walls and ceiling, which took him 24 years to complete, from 1564 until 1588. He achieved an incredibly uniform and impressive work.

The Scuola Grande di San Rocco is an impressive two-story building, but only three halls are open to the public, two large rooms and one slightly smaller.

We suggest visiting the Scuola Grande di San Rocco if you are not an art fan or know little about the subject. You will most likely find it more interesting than the Gallerie dell'Accademia since, although the building contains less artwork and is smaller, the building’s architecture is extremely striking.

The Church of Saint Rocco is in the same square as the Scuola. The entrance is free and it has the same opening hours as the first. We recommend visiting the temple after the museum. 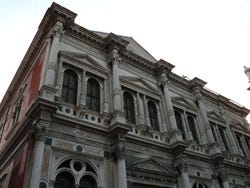 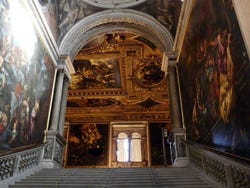