Padua (in Italian: Padova) is a small city located 23 miles (38 km) west of Venice. The Bacchiglione River runs through the city and in the north of Padua flows the Brenta River. These two rivers have had a deep impact on the development of the town throughout the centuries.

Since it is so close to Venice, it is a great place to visit, for example, one morning or afternoon.

Thing to do in Padua

Padua is a small city; therefore, you can explore its streets, landmarks and monuments in a few hours:

The Basilica of Saint Anthony is the most important religious edifice in Padua. It is dedicated to Saint Anthony of Padua, a Portuguese Catholic priest who died in Padua in 1231. The temple was founded during the thirteenth century to house the remains of the saint, immediately after he was canonized.

As well as visiting the Basilica, which has an impressive interior, visitors can also see several cloisters and a museum dedicated to Saint Anthony.

The exterior of the basilica is remarkable. Its façade is Romanesque, its domes are Byzantine and the central tower and the bell towers are Gothic-styled.

Prato della Valle is the largest square in Italy. It is surrounded by a water canal with numerous statues of distinguished Italians, including philosophers, writers, intellectuals and doctors, making it one of the most unique squares in Italy. The sight of the statues reflected in the canal lit by the moonlight is one of the most beautiful sights of Padua.

These are two important squares separated by the Palazzo della Ragione. You can visit a colourful market in the Piazza della Fruta every day.

This small brick chapel is the city’s most famous church, as its interior is decorated by large frescoes painted by Giotto. It is located in the Arena, a prominent Roman architectural complex.

How to get to Padua?

The best and easiest way of getting to Padua from Venice is by train. Several trains depart from Venezia Santa Lucia railway station every hour. The regional trains cost 4.10 € and take 25 to 50 minutes to get to Padova. In peak hours, trains can sometimes cost over 15€. 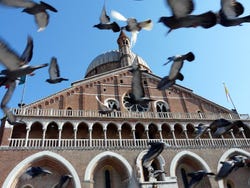 Basilica of St Anthony in Padua 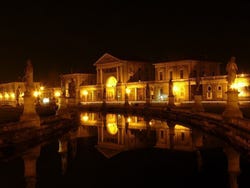 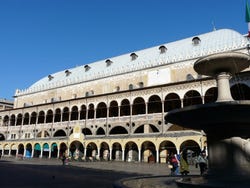